The Art of Being Present 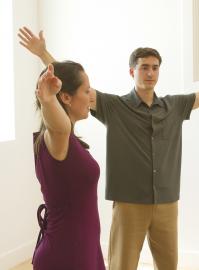 It’s hard to wrap your mind around Breema. At first, this approach to mind/body unity appears to resemble more familiar types of bodywork: To a casual observer it can look a bit like Thai massage, Shiatsu or Ortho-Bionomy. Yet once you experience it and start to learn about its underlying philosophy, you realize that Breema body-work (and Self-Breema) isn’t like anything you’ve ever seen, felt or done.

While there’s no such thing as a standard Breema session, it usually, but doesn’t always starts with the recipient lying on her back, fully clothed, on a rug or futon. Before laying on hands, the practitioner first gets in touch with his breath and the weight of his own body. He may then hold the recipient’s feet and move her body around in a gentle yet firm way, working his way up the body. But there is no prescribed order, and there are no rules. Owing to the hundreds of hours of experience practicing Breema—and by being fully present in his own body—the practitioner will simply know what to do and use his body as a mirror of sorts, to give a treatment to the body before him. The result: a profound mutual sense of nonjudgmental support, trust and nurturing.

Students of Breema learn several hundred gentle, rhythmic movements and sequences, but what they really work with are the discipline’s underlying nine principles of harmony: Body Comfortable; No Extra; Firmness and Gentleness; Full Participation; Mutual Support; No Judgment; Single Moment/Single Activity; No Hurry/No Pause and No Force (see box at right). The movements embody the principles, and the principles relate not just to Breema but to any discipline—and to everything in life, for that matter.

Breema is based on the belief that we have three “centers” (body, mind, feelings) and that in our ordinary state of existence, we predominantly live inside our minds, caught up in thoughts, memories or plans for the future. What’s more, we tend to mistake those thoughts for our true essence. But like clothes we put on and take off, our thoughts are passing aspects that are part of us yet not fully us. The unavoidable conditioning that occurs in life (from our families, schools, social groups, media) causes us to lose our true sense of self. 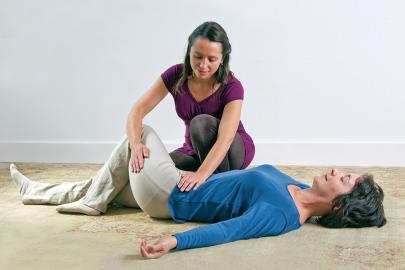 In Breema, these layers of conditioning are referred to as crystallization. When we practice Breema and tune in to the nine principles, we begin the process of decrystallization, or seeing through the layers of conditioning. What we find underneath is an authentic experience—or a “taste,” in Breema parlance—of being alive. As Jon Schreiber, director of the Breema Center in Oakland, CA, puts it: “As we deepen our understanding of the principles, we learn to relate to our bodies, ourselves, other people and everything in life. The experience of touching a body in a nonjudgmental way gives us glimpses that we aren’t separate from anything in the universe. Breema teaches us to participate fully in life and to see that everything that happens is part of existence manifesting.”

Unlike Swedish massage, which is orchestrated to end at the head after 60 or 90 minutes, a Breema session can last anywhere from 20 minutes to close to one hour. “When I started doing Breema professionally, I would do an hour to an hour and a half,” says Schreiber. “But over the years, without making any ‘decisions,’ it got shorter and shorter. Now, I don’t have a set time: I work on you till I feel like I’ve done what’s necessary, till it feels complete.”

While it’s hard to quantify, Schreiber says there’s a discernible difference between the genuine act of giving Breema and going through the motions yet missing it. It’s a quality of flow and the embodiment of the principles. “After all this time, when I receive Breema, I can just tell,” he explains. “In one moment, someone might be doing Breema, but in the next they’re not. If there’s force in it, it’s not Breema.” To become a certified practitioner, students need a minimum of 165 hours of hands-on experience, including 15 hours of anatomy and physiology. At its heart, though, Breema is totally experiential. There are at least 300 movements and sequences that are taught in a very precise way and followed exactly until they have become so second-nature that a practitioner can authentically improvise.

The two disciplines feel like a natural pairing, considering how Pilates movement cannot be done without the engagement of the mind. At least two people who combine them find that Breema’s emphasis on mutual support and nonjudgment enhances the method in unexpected ways. Salena Gissola Schenatto Irion and her partner, Felipe DeOliveira, run a Pilates/Breema studio in Barcelona called Centro Harmonious Life. The two PhysicalMind Institute–certified Pilates instructors studied Breema in their native Brazil before moving to Spain. “I was always seeking a method that regarded the body as more than muscles, bones and tissues,” says Salena. “And Breema views that body as a holistic system in which body, energy and consciousness cannot be separated.”

Felipe enjoyed Breema from the get-go but was surprised at what he discovered after his third workshop. “There’s something behind the bodywork—it’s a way to understand yourself,” he says. The couple explain that some of their students just do Pilates, a few just Breema, and some do both. But students don’t need to receive a formal Breema session to reap the benefits. As Salena puts it, “One of our Pilates-only students had done Pilates in other places, but she said found ‘peace and inner strength’ in our studio, something she hadn’t found elsewhere.”

“We know Pilates is good for the body,” Felipe observes. “But now, with Breema, we’re more nurturing and people are getting more out of their sessions. When you have no judgment, the other person feels accepted and can let go of other things. Breema helps them relax, which makes it easier to make adjustments and be comfortable in their bodies.” 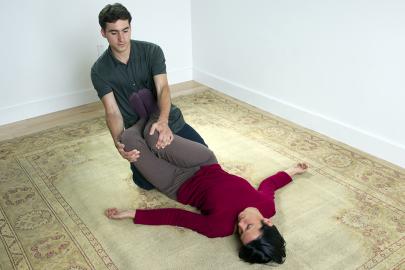 Well, of course I had to experience Breema firsthand. The Breema Center introduced me to Mary-Beth Charno, a Breema instructor and practitioner, yoga teacher and holistic oncological nurse based on Long Island. As we drive to her home for the session, I ask her how people find her, given that there are only a few hundred people practicing Breema, and why they come, when it sounds to me like Breema is more about the practitioner using the nine principles to raise his or her awareness of the connection of body, mind and feelings and become more present in everyday life.

“People usually tell me that they came across a flyer or hear about it through word of mouth. There’s an atmosphere that’s relayed and comes alive when it’s communicated,” Mary-Beth tells me. “A person gets a taste of it and wants to know more. So they end up seeking out a way to receive the treatment. I think they recognize a nonjudgmental atmosphere because Breema is nondiagnostic. They feel very nurtured and it’s almost as if it speaks to the recipient’s essential self.”

She goes on to talk about the allure of a system that doesn’t try to “fix” anything. “If I were coming at this from a diagnostic point of view,” she explains, “I’d be assessing how your body is: Is there something going on in the hip joint, should I lean in more…? In Breema it’s not that I’m not concerned, but if I come back to the principle of Mutual Support, the essence will show me how much to lean. Feedback I get is that people really enjoy having the opportunity to feel balanced, relaxed, nurtured and supported.”

At her home, she leads me upstairs to a room designed for bodywork and yoga. I lie on a futon, wearing the loose clothes I came in, including socks. She asks if there’s anything to know about my body, then explains she’ll start by placing her hands on my feet, working her way up to my head. When her hands leave my body, she says, the session is done. She starts by holding my feet, then raising them one at a time, first my left, then my right. Immediately I am filled with a sense of trust and the feeling that I can “let go”: The way she moves my body is slow, gentle, controlled, rhythmic, supported, guided and flowing. There’s never a pause but never a push. It feels like my body is doing the moving itself.

At times she turns a leg, putting me into a gentle side twist. Sometimes she taps my leg, sometimes brushes it, sometimes uses her hands, sometimes her own soft-socked feet. There’s a tenderness to the movements. She crisscrosses my body, stepping over me, and as she slowly works her way up toward my chest and head, I feel the problems I came in stressed-out over grow smaller and feel further away from the present. Toward the end she sits behind me and gently raises my shoulders one at a time and slides her feet under them, putting me in the gentlest backbend while she cradles my head in her hands. I am conscious the whole time but relaxed. I have no “visions” of color or energy moving, just of a “dropping down.” She ends by crossing my arms over my chest and stepping away. When I sit up, I am profoundly relaxed and calm. Things feel slower, clearer and more in focus. My mind is impressively empty of thoughts, except for one: I need more of this.

*The Art of Being Present was written by Suzanne Gerber and originally published in Pilates Style Magazine.

Resources
File
The Art of Being Present