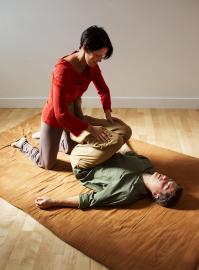 In a Breema bodywork session, the client typically lies flat, fully clothed, on a mat. Drawing from a retinue of some 300 movement-sequences, the practitioner then touches, holds, pulls, and does other things to the client's body: stretching the legs, perhaps, or folding them to one side; cradling the head; or clasping both hands and leaning back.

While remaining conscious of the client's issues and needs, the practitioner chooses movements based more on whatever feels right for the practitioner him- or herself. "It's not about 'What's wrong with the recipient and what can I do to fix it?' Rather, it's 'What do I need in this particular second to bring myself exactly into harmony?'" explained Jon Schreiber, director of The Breema Center (6076 Claremont Ave., Oakland). "And this usually turns out to also be what the recipient needs, so the two bodies virtually start to function as one body, and it becomes the most natural thing in the world."

After taking pre-med courses in college, Schreiber became a chiropractor. It was 1980; bodywork was starting to blossom, and with associates in Oakland he devised the system now known — and practiced internationally — as Breema, based on "Nine Principles of Harmony" that are meant to be blueprints for a balanced, stress-free life. During bodywork sessions, practitioners "work with the principles," Schreiber said, "and begin tuning themselves in while they move."

Drawn from diverse traditions and common sense, the principles include "Body Comfortable," "No Extra," "Firmness and Gentleness," "Full Participation," "Mutual Support," "No Judgment," "Single Moment/Single Activity," "No Hurry/No Pause," and "No Force."

"You could say that they're universal and that they've always existed," Schreiber said of the principles. "We extracted and distilled and formulated these ways of expressing the direction in which people could move to increase their consciousness."

"Body Comfortable" is the focus of a two-part workshop that Schreiber will lead at the Breema Center on Sunday, January 24. Beginning with an examination of the principle's physical and spiritual dimensions, the workshop also includes techniques that can be performed with practitioners and alone, such as "Self-Breema."

"People think of discomfort as 'Oh, my shoulders are tense; I should take a deep breath and relax,'" Shreiber said. "That's a step in the right direction, but the principles have this cosmic aspect to them." One of his favorites is "No Extra," which entails uprooting faulty programming, "which we call our personalities," to reach the pure, innocent essence within.

"If you think, 'All I am is my personality,' then you don't want to see how manipulated and conditioned it is, because that makes you more despairing. But you didn't create this personality. It's just your outer layer." Meanwhile, the inner essence, waiting to be found, "is clean and has room to grow."