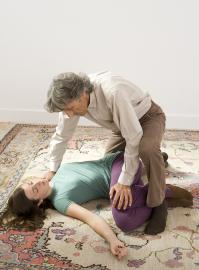 Imagine lying on a soft carpet surrounded by plush pillows — wearing loose, comfy clothing and slipping into a dreamlike state. A skilled practitioner uses his or her body to move you slowly into a stretch, and then rocks you to create a sense of well-being. The rhythm of the movement creates a soothing release of stress and starts to align your body physically, mentally and emotionally. Sound like a heavenly spa treatment? It’s actually body work, designed by an Oakland hills doctor.

“As soon as I started chiropractic school,” said Breema founder Jon Schreiber, “I wanted something with a deeper meaning.”

He was looking for something holistic, and started working with like-minded colleagues to develop a new kind of bodywork. By 1980 he was ready to open the Breema Center, an institute in Oakland that would become an international headquarters for certifying practitioners and instructors.

What’s different about Breema is the philosophy of nine basic principles: looking at the body as a whole, nothing extra needed to express our true nature, firmness and gentleness (real firmness is always gentle — real gentleness is always firm), full participation (the most natural way of moving), mutual support (giving and receiving support), no judgment, single moment/ single activity (each moment is new, fresh and totally alive),
no hurry/no pause (the natural rhythm of life energy) and no force (when we let go of assumptions of separation, we let go of force).

“I use the treatment as an opportunity to bring your body to a balanced state,” Schreiber said, acknowledging that he used to be terribly out of balance. “When I started doing this, I was famous with all my friends as the stiffest person they’d ever met.”

Thirty years later, Schreiber is the epitome of good health. There’s an aura of peace when he enters the room, and his bodywork is like meditation. In fact, the Breema Clinic (across from the Breema Center) seems more like a spa, with its rich tapestry rugs and inviting aromas of apple and cin-
namon. After your treatment, a soothing steam heat pad is placed gently on the back of your neck.

“I can’t believe how good I feel,” said nurse Lois Aldrich after her first Breema session. Her skin was glowing and she felt limber and energized. Schreiber even uses Breema on his two children, who — like many teens — spend a lot of time on the computer. “They’ve seen it because I practice it at home. I say ‘Turn off your iPod for five minutes, and let me work on you.’ “

“I taught a workshop in Spain with a lot of powerful doctors,” he said, adding the group was skeptical at first. By the end of the first day, the enthusiasm was contagious. “It was so revolutionary,” he said. “Just the ideas and principles.”

That, to Schreiber, is the most powerful part of his practice — teaching transformation through touch and mental awareness.

Oakland’s Breema Clinic is located at 6201 Florio St. The Breema Center is at 6076 Claremont Ave. Find out more about Breema at www.breemahealth.com.

*Doctor develops holistic bodywork was written by Ginny Prior and was originally published in the Montcalarion.