Practice for Living: Breema teaches ‘Art of Being Present’ 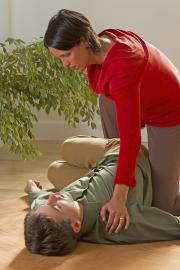 “Some years ago I was searching for a meaningful and satisfying hands-on practice. At a conference I received a short Breema session, which took me into a deep and supportive atmosphere unlike anything I had experienced before. The practitioner gently moved my body in such a way that I was able to totally let go of physical and emotional tension I had been carrying... I noted how quickly I felt connected and knew I wanted tofind out more.”

That is how Karen Hensley describes her introduction to Breema. Gentle and nurturing, yet incredibly penetrating, Breema benefits both giver and receiver, but what it really offers goes far beyond its therapeutic effect on physical conditions.

Breema is a transformational system of self-discovery consisting of bodywork sequences (movements done with another person), Self-Breema exercises (movements done on one‘s own body), and a universal philosophy. Done fully clothed on a carpeted surface, Breema uses comfortable and natural rhythmic  movements—including leans, stretches, holds and brushes—that help relieve tension and pain in the physical body, and are relaxing yet energizing at the same time.

In 1980, Jon Schreiber founded the Breema Center, world headquarters for teaching Breema and certifying practitioners and instructors, and the Breema Clinic, where Breema is practiced therapeutically, in Oakland, Calif.
He prepared for a traditional medical degree and subsequently completed his Doctor of Chiropractic degree. Searching for a truly holistic approach to health and life, he began working intensively with a group that formed to support that search, and developed Breema. Although it is now taught and practiced worldwide, the original aim of Breema remains vibrant: to support true health by using the Nine Principles of Harmony and connection to the body as practical tools to cultivate the art of being present.

These nine principles are at the heart of Breema’s philosophy:
Body Comfortable, No Extra, Firmness and Gentleness, Full Participation, Mutual Support, No Judgment, Single Moment/Single Activity, No Hurry/No Pause, No Force. 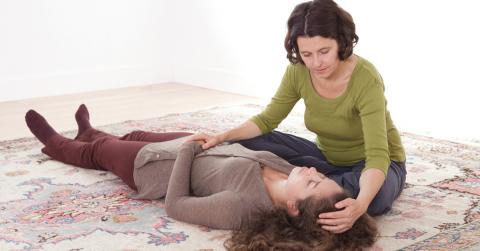 Applying the principles helps people move in the direction of letting go of random thoughts and reactive feelings by actively bringing body, mind, and feelings to work together harmoniously. Those automatic thoughts and feelings, based in past events or an imaginary future, drain energy and make one less available to life. The principles allow practitioners to learn to unify body, mind and feelings. That creates an openness that invites the possibility to live fully in the present.

Working with the principles supports the practitioner to be present, which creates an atmosphere of acceptance and a deep sense of well-being. In that atmosphere, both giver and receiver can connect to a more essential aspect of themselves. Breema sees this harmonious connection as the foundation of real health.

Anyone can benefit from Breema, not just those interested in bodywork, by bringing the principles to any situation in daily life, thereby creating more receptivity and balance. This morning while making tea I saw that my mind was thinking about what I needed to do ‘’later,’’ I was vaguely anxious, and my body was somewhat tense. I remembered Full Participation and brought my mind to be with my breath and weight, registering my feet on the ground while pouring the hot water. Standing there in the kitchen, I had a tangible taste that I existed, a sense of being fully alive in the moment. This moment was totally new, and I was present. I had come out of ideas about my life and into the reality of it, and Breema was the catalyst.

*Practice for Living:  Breema teaches ‘Art of Being Present’ was written by Elaine Pendergrast and originally published in Many Hands Magazine. Elaine is a Staff Instructor at the Breema Center in Oakland, California.